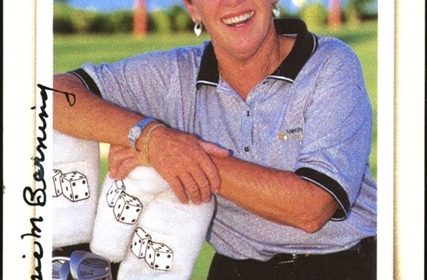 Trying to stay a bit ahead of the curve sent me digging to find a card for Class of 2022 HOFer Susie Maxwell Berning. So far this is the only card I’ve been able to locate for her and haven’t been able to figure out much about it other than the American Airlines logo and the way ‘1997 Highlights’ is separate from ‘Career Highlights’ leads me to believe it’s a 1998 issue. The seller indicated that these were produced by Pinnacle, but with no reference on the card itself, there is no way of knowing for certain.

Sadly, the logo itself doesn’t help narrow down the date, as that logo was used from 1967-2013, but compared to other sports cards and pocket schedules that American sponsored in the early 1990s, those all spelled out “American Airlines”. My thought is they started using the logo only, sometime after their website launch in 1997 of http://aa.com, which would fit in perfectly with a 1998 release.

I also haven’t been able to determine if this is a single card promo or part of a larger set. Any additional info would be greatly appreciated.